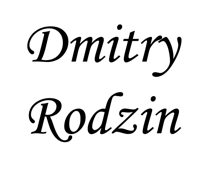 Dmitry Rodzin was born in Krasnodar (Russia) in 1969. His educational background includes the studies at Krasnodar Art College (1984-1988)and at The Russian Academy of painting, sculpture end architecture (1991-1997) (Russia, Moscow). Now live in Moscow.
His works can be found in the residence of the President of the Russian Federation, Reception House of the President of the Russian Federation, Svyato-Troitsky Serafimo-Diveyevsky Convent, New Jerusalem (Voskresensky) Monastery, St. Panteleimon’s Nunnery (Ukraine, Kyiv) and in other governmental facilities and in private possession in Russia and abroad.